Anarchy in the Jungle! Choose one of more than 20 hilarious Incrediballs and take advantage of their unique properties to escape the hazards of the jungle for as long as you can. Dodge left, dodge right and push other players around, it's the law of the jungle! 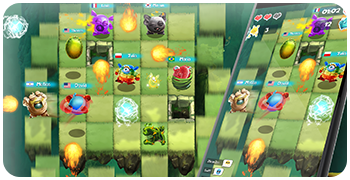 Prove your might against the fiercest warriors in the Brawlhalla Grand Slam! Jump on other players and slam them with bombarding force in this free-for-all struggle in a unique vertical arena! 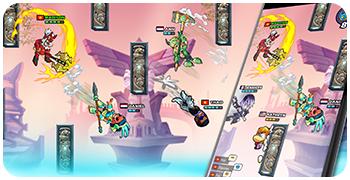 Take on the fastest drivers in the world for the ultimate speed challenge! Join 15 other players in lightning-fast elimination races and show off your skills by acing precision turns, high-speed jumps and crazy loops! 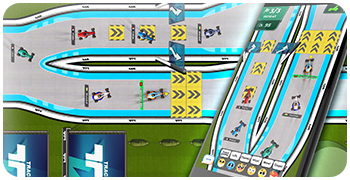 Appoint your most trusted Assassin and enter the animus with seven other players. Climb, jump and use the environment to surpass the dangers and get to the extraction point first! 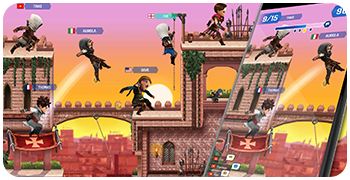 Dive into vast battlefields with your favorite Ubisoft Legends and take on up to 99 other players in an explosive battle royale! 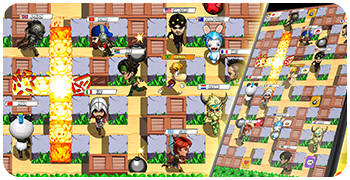 Lead the mightiest army and crush other players! Summon Epic heroes, recruit thousands of soldiers and use the terrain strategically! 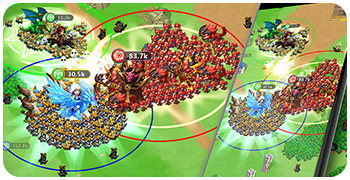 Rabbids Island is crumbling in a colossal volcanic eruption! Make your way on the collapsing floor before the other panicking Rabbids take you down with them! Pick up bonus items and trap other players to play dirty and make them fall first! 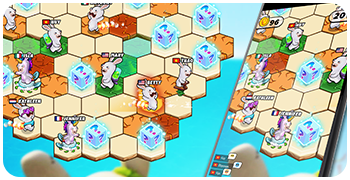 The range of games is wide and ranges from racing games to battle royale and various action-packed fighting games. Compete with numerous online opponents and always keep a cool head even in the hottest battle or the fastest race.

These Ubisoft Nano games are recommended by the editors

Trackmania Blitz is a fast mini-racing game based on the Trackmania series, in which you have to finish first or first if possible. All you have to do is steer your fast speedster and drift skillfully through the curves, but even that is quite a challenge!

Rayman's Incrediballs Dodge is a battle royale game with cute monsters based on the popular Rayman series, here specifically on the Rayman Adventures app. Make sure your Incrediball monster survives as long as possible on a shrinking playing field and keep equipping it with awesome power ups.

In Brawlhalla Grand Slam, on the other hand, you can take on seven powerful opponents as a brave warrior and go into battle with 42 badass Brawlhalla legends! Swing your sword or one of four other weapons in Battle Royale mode and hit your opponents when they least expect it!

Assassin's Creed FreeRunners gives you the opportunity to chase across the rooftops with numerous characters from the legendary Assassin's Creed series. Run, jump and climb with the Assassin of your choice like the famous Ezio Auditore or Eivor and compete with seven other players. Enter the Animus, the time machine relevant to the game series, and synchronize your memories there. Then race to the front of the field of players and boost your synchronization with the Leap of Faith jump from a great height to accelerate. Which one of you will make it to the finish line first? No wall is too high for you and no gap between the houses too wide!

And if all that isn't enough excitement, All-Star Blast offers you the chance to engage in an epic Battle Royale fight with more than 20 legendary Ubisoft characters. Choose between Raymond, Sam Fisher from Splinter Cell, Ezio from Assassin's Creed or Fenyx from Fenyx Rising and many others. Compete against 99 players online and play for victory in five classic Bomberman-style environments. Upgrade your character and keep building up their strengths for the next battles. Can you get to the top of the winner's list?

Speaking of battles, there's also a lot of fighting in Might & Magic Armies, and this time there's even magic involved. Lead your medieval army into battle, recruit thousands of new soldiers and play with 12 magical heroes in four available factions. The Might & Magic role-playing game series has been around since the 1980s in the form of various computer games. It hasn't lost any of its charm since then and also does well as a Ubisoft Nano game adaptation.

Rabbids Volcano Panic, on the other hand, is based on a turn-based console game in which the island where the cute bunnies live is rocked by a volcanic eruption. Now it's a matter of survival! Get your character to safety and protect them from 15 other players and their panicked bunnies. Maybe even play dirty to make them fall into the lava first. The strategy game will keep you entertained for a long time and the funny costumes and power ups will also add to the fun.

Curious now? Fight for victory with your favorite characters from Assassin's Creed, Might & Magic or Brawlhalla and play Ubisoft Nano games online for free on KibaGames!