Worm Hunt: Snake Game IO Zone is a new multiplayer game where you can grow the biggest and strongest worm among worms!

In this Battle Royale game, several worms are placed in a confined space and they are all mighty hungry! Naturally, each one wants to claim the biggest piece of food in order to grow and dominate the field. Gradually, however, the field is reduced in Worm Hunt: Snake Game IO Zone. A five-second countdown shows you when this happens, and the field that disappears also lights up red. So hurry away!

Control your worm with the mouse and accelerate with the space bar.

Tips and tricks to survive for a long time

When you're not searching for food in the earth pit, you can improve your worm in the main menu. 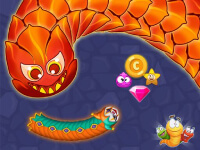