Questlike: Web is a musical fighting game in which you can defeat 15 different monsters.

Do you like to hunt monsters? Then Questlike: Web is the right game for you! On three unique biomes you can meet 15 different monsters.

Since this is a rhythm-based game and runs with music, it is recommended to play with sound on. Use two buttons in battle: Attack and Defend. Watch out for the icons in the center that move across a line until they touch the center marker. The monster will either make an attack here, in which case you'll have to quickly press your defense, i.e. your shield, or it will give you a moment to attack itself with your first weapon. Swing the sword and react at the right moment!

After you have defeated the first monsters in rhythmic combat, you will receive materials with which you can craft more weapons. You can collect up to 18 different materials. As in great monster-hunting titles such as Monster Hunter, here you'll have to pay attention to the advantages of your weapons and whether they exploit the monsters' weaknesses. If you don't manage it, the monster will run away and you'll have to try again.

How to play Questlike: Web

To fight, you need a separate ticket for each area. When you have unlocked all three areas, the mountains, the grasslands and the caves, you will get an overview under Hub, which monster is currently there and if there is a bonus.

In the Inventory, your backpack, you can see which weapons and materials you have already found and own, but also which weapons you can craft. If you are able to equip or craft something, the grayed out buttons "Equip" and "Craft" will be highlighted in brown.

Under Shop you will find the possibility to buy scrolls with which you can improve your weapons. You need tickets to be able to go hunting.

If you like Questlike: Web, you should also play Dynamons 4.

Fight now with rhythm and brains and play Questlike: Web online for free on KibaGames! 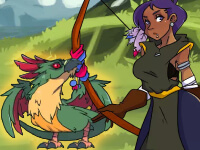