Ninja Revenge - fight for your city!

Ninja Revenge is a great action game in which you'll be able to defend your city from a horde of bad guys!

Your city is under attack and you have to defend it as an Asian martial artist. As a ninja, you'll have throwing stars, called shuriken, at your disposal. Hit your opponents with a short throwing weapon and defeat them while they are on your level or below and above you. In 21 levels you can face larger and larger hordes of enemy ninjas.

Controls: You play with your mouse or finger. Click on your ninja fighter and drag the mouse to hit the enemy. A dotted line serves as a guide for you to adjust correctly.

Note: at the beginning the enemies are just standing, but later they move in different rhythms and you have to estimate exactly when to throw your weapon at your enemies.

More exciting fighting games for you

If you liked Ninja Revenge, why don't you play Merge Blast?

Can you defend your city with the throwing stars? Find out now and play Ninja Revenge online for free on KibaGames! 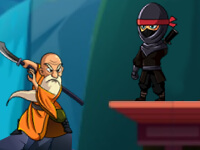