Towers: Card Battles is a cool strategy game in which you'll be able to fight turn by turn in a tower and protect a princess.

Your goal is to protect the princess from the invaders in the embattled tower in a medieval setting. If her life goes to zero, you've lost the level. But you can't let it get that far!

Set up your archers and knights in the tower by dragging their cards to the place of your choice and then clicking or tapping "Fight". Use your deck strategically and pay attention to the combat power and life force of your soldiers. Merge your fighters as needed to make them even better and use boosters to win levels. Skulls above the units indicate that they will not last the round.

Gradually, new units are added, such as ninjas that attack twice in a row and wizards that can damage all units in a tower section.

If you liked Towers: Card Battles, why not play Kings Clash and engage in more epic sword fights?

Can you save the princess? Build up your troops with the right tactics and play Towers: Card Battles free online on KibaGames! 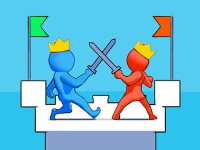