Tank Battle is a classic fighting game in which you can fight with your tanks in a maze against an enemy army.

Fight for victory and control your tanks with the arrow keys. Use the spacebar to shoot. And off you go!

Drive through different mazes and dominate the battlefield with good tactics. Shoot your way free or sneak up on your enemies. Then shoot them down as fast as you can and protect your blue shield from the invasion of your enemies.

During Tank Battles, collect coins and power ups on the field that you can use during your attacks or invest in better equipment for your war machine between levels. Make sure you don't lose too many tanks during the battles and upgrade your army to the highest combat power. 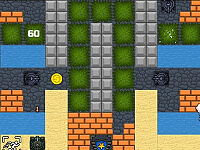