Tomb Runner is a classic jump and run game in which you'll be able to experience more adventures in the jungle with Professor Jones and collect lots of diamonds.

Quickly jump into the first level that will take you to the jungle of Central America and go on a fast-paced treasure hunt together.

Attention: contrary to what is stated in the game, Tomb Runner must be played with WASD instead of the arrow keys! Run, jump and slide across ancient bridges and ruins and collect all the diamonds. The temples of a lost culture offer lots of treasures, but also numerous dangers that your fast archaeologist will have to face. In Tomb Runner, as always, avoid all traps, use power ups and unlock new fun game characters like Lara Bones, the Mummy Agent or the Disco Dancer. 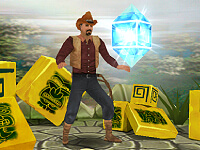