Rhino Rush Stampede is a fun jump and run game where you can take control of a fast rhino.

The rhino is quite hungry and wants to collect lots of tasty fruits on his way to a new high score! Make your blue friend jump with the up arrow and use the space bar or the down arrow to speed up especially or make an attack.

Run with the rhino as long and fast as you can, punch through boxes, throw enemies over the top and sometimes turn the rhino into a dinosaur or dragon to move forward more effectively. Let balloons carry you through the air, sit on the back of a flamingo or become a power rhino with the right power ups. Collect as much fruit as possible so that the shaman can keep cooking you new power ups between levels.

But be careful: of course, not only enemies are lurking in front of you, but also traps and obstacles - jump over them skillfully and don't let anything upset you in Rhino Rush Stampede.

Who is the fastest animal on the savannah? Not the cheetah today, but the rhino! Pick up speed now and play Rhino Rush Stampede free online on Kibagames! 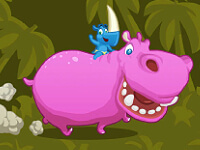